At the Installation meeting of John Pyel Lodge No. 5195 held on Tuesday the 21st of September 2021, the Provincial Grand Master, RWBro Max Bayes, was pleased to present WBro Michael Anthony Gorrod PPSGW, CoM with a Diamond Jubilee Certificate in recognition of his 60-year’s service to Freemasonry. 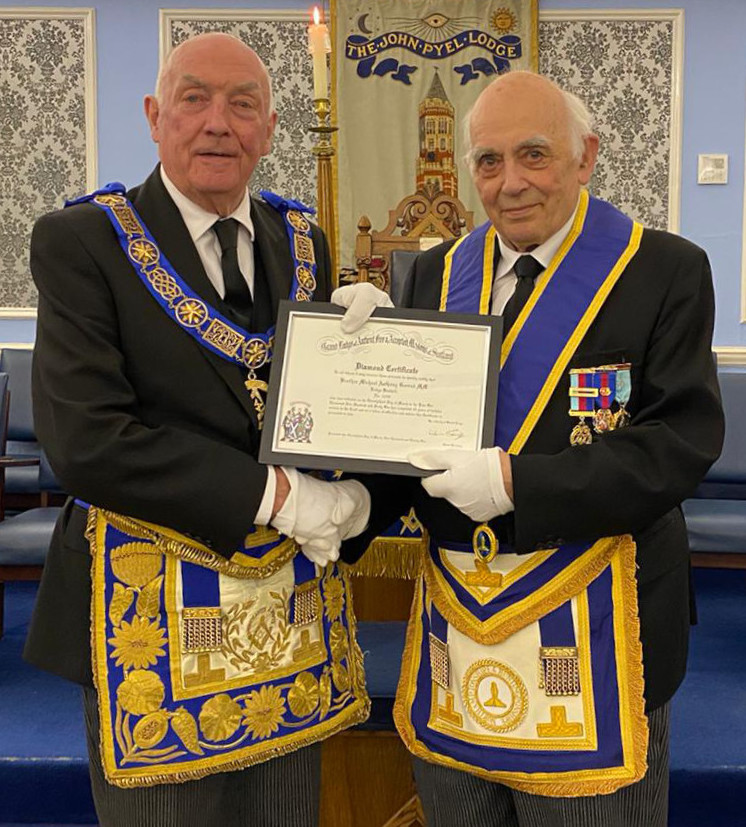 Mike was initiated into Kirkhill Lodge No. 1230 in the suburbs of Glasgow on the 23rd of March 1961. He was subsequently made a life member, which in Scottish Freemasonry is a high privilege.

Originally born in Norwich, WBro Mike was a top-rate sales executive in the shoe trade, working mainly for the Norvic Shoe and Boot Company.

Mike’s employment resulted in a posting that saw him move north to cover the whole of Scotland. It was during this period that he met his lovely wife, Ann, with whom he has 3-children and 5-grandchildren.

After several years, Mike moved to London where he was requested to take over Norvic’s office, mainly because of internal problems.

After a short time, Mike’s excellent management and people skills resulted in promotion and subsequent travel across the world to attend international shoe fairs.

Following a stint of globetrotting, Mike left the company and moved to Kettering to start his own business selling large quantities of shoes.

It was his wife, Ann, who persuaded Mike to join Freemasonry in the town, resulting in him becoming a joining member of Willowbrook Lodge No. 7439 on the 25th of March 1993.

Mike showed his commitment to the Lodge in many ways, including serving as Worshipful Master for two consecutive years between 2005 and 2007.

Mike's skills and abilities were subsequently recognised by the Province thus resulting in an appointment to acting Provincial Grand Steward in 2008.

In 2011, Mike was appointed to the new position of Provincial Grand Orator, a challenging role which he held for a period of 4-years. A great communicator, Mike used his skills throughout this time to present and explain complicated subjects in simple terms.

A high moment in Mike’s Masonic career was in 2016 at the Lodge of St James Installation meeting when the Provincial Grand Master, RWBro Max Bayes, awarded him his Certificate of Merit along with an immediate promotion to Past Provincial Grand Senior Warden. 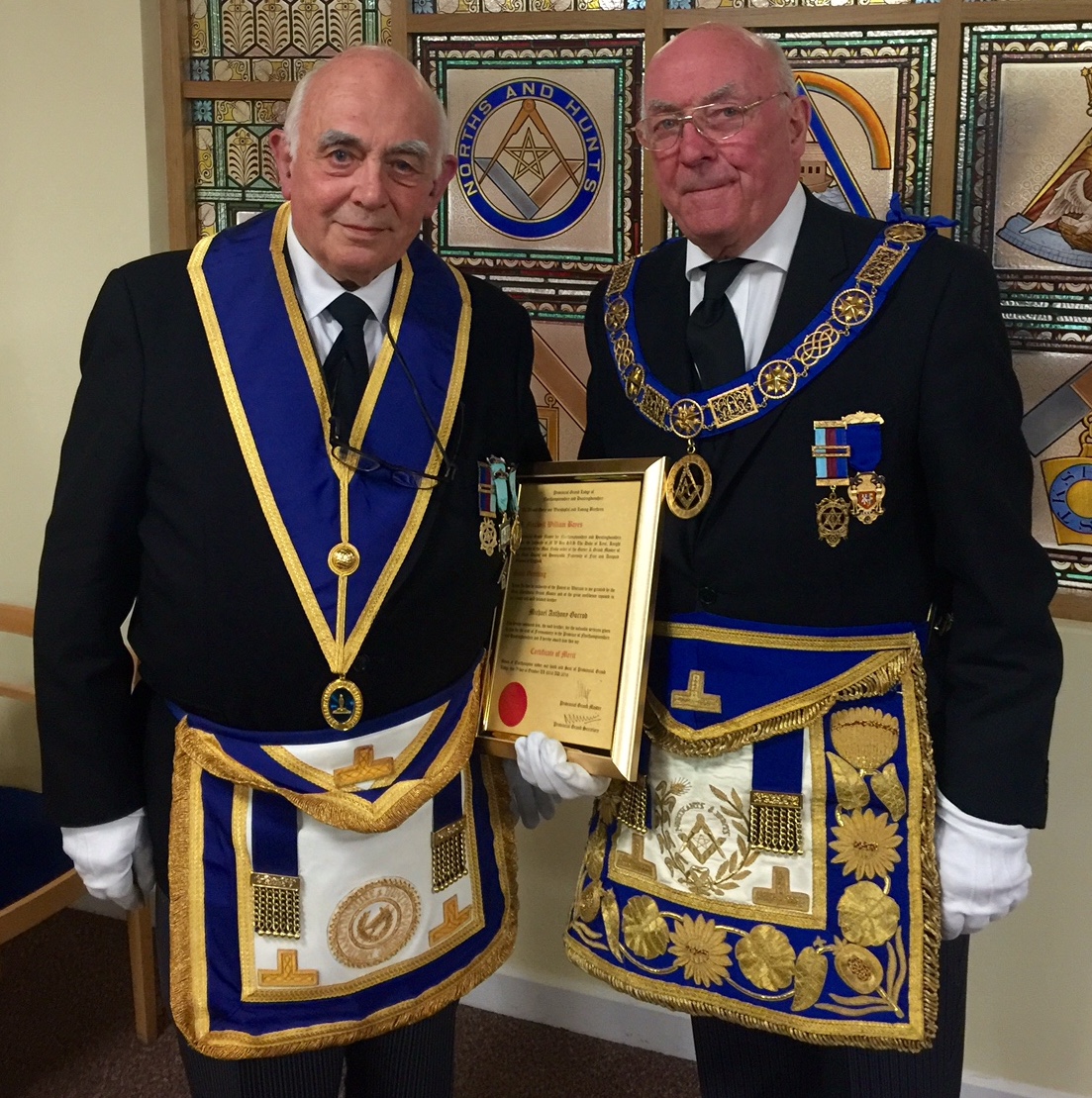 Mike is also a member of Northants and Hunts Lodge of Installed Masters No. 3422, Palmer Lodge of Provincial Grand Stewards No. 8995, and Pro Musica Lodge Number No. 9547 where he has not long been installed as Master.

E Comp Mike is also a subscribing member of the Royal Arch having been exalted into St Crispin Chapter No. 5267 in 1998. In 2016, Mike was appointed Past Provincial Grand Standard Bearer.

We congratulate WBro Mike on reaching this fantastic milestone and thank him for the significant contributions he has made to Freemasonry throughout the years. 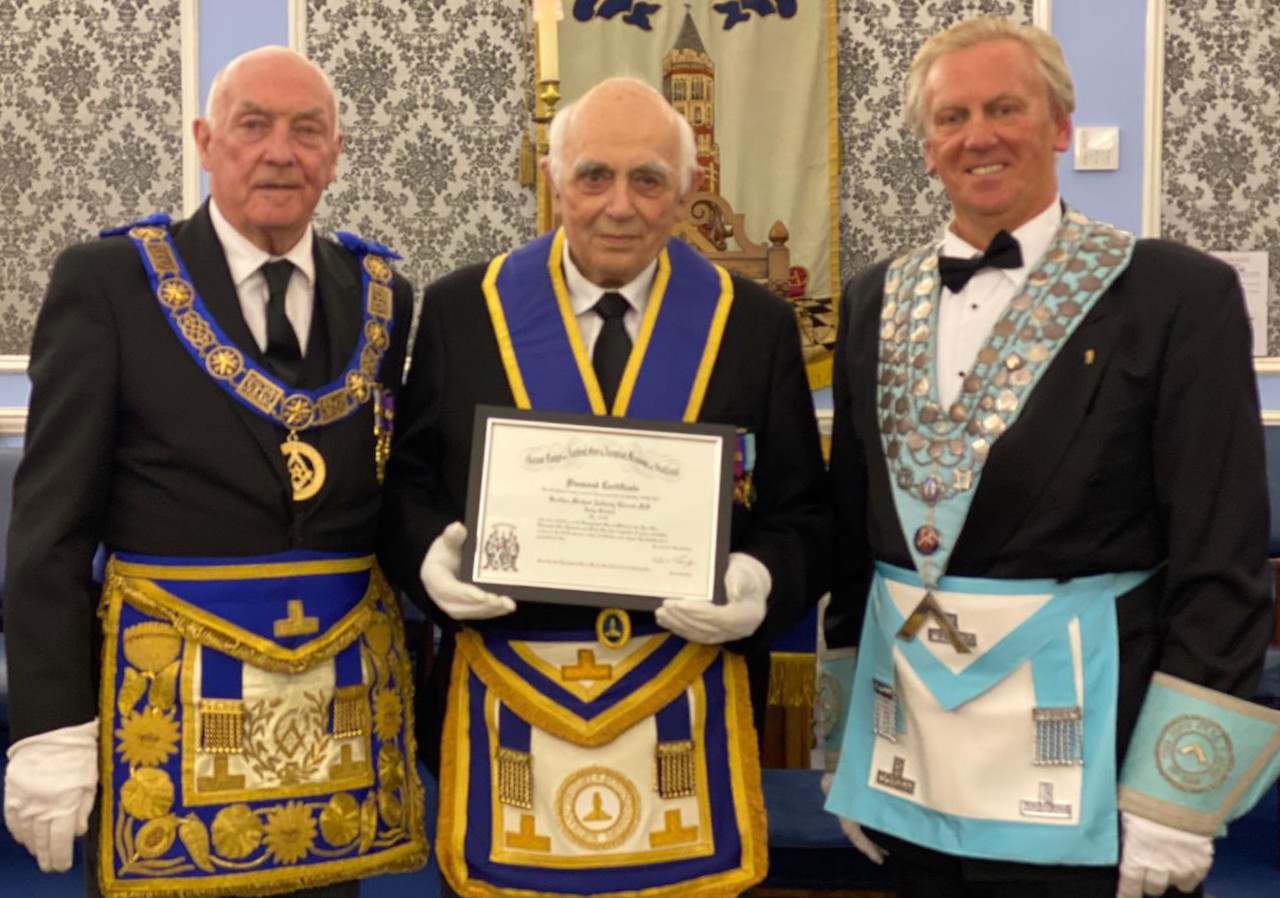