Franklins Gardens in Northampton, for over 100 years the home of Northampton Saints Ruby Football Club has seen many attendance records in its time.

On Thursday 28 June 2012 it saw an attendance record with a difference when the Holy Royal Arch Province of Northamptonshire and Huntingdonshire held its Annual Convocation, attended by over 260 Companions. 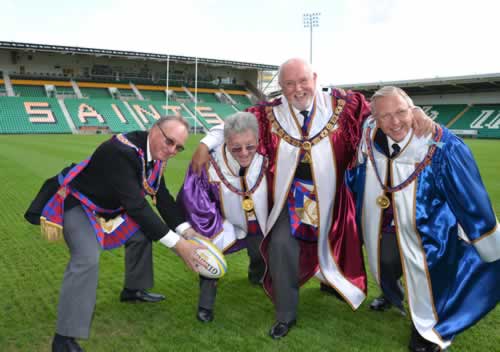 After the ceremony three representatives of the Royal College of Surgeons, lead by Jonny Fountain, were well received when they addressed the Companions in support of the Holy RoyalArch 2013 Bicentenary Appeal for the College.

The consensus of opinion was that Franklins Gardens had proved to be an excellent alternative venue after the sale of the Masonic Hall in St George's Avenue and the 2012 Annual Convocation had been in unqualified success.