After the usual business at Euston Lodge on 17 December 2014 and before the Risings the Provincial Grand Master, RWBro Max Bayes, rose to address the Brethren.

He started by reminiscing about his days as a very keen cricketer and how he met a young man who was a demon bowler. It transpired that although both were and still are Freemasons neither was aware of this at the time. It soon became obvious that the PGM was referring to the young Peter Davison who acting as organist.  The PGM thanked Bro Peter for his long and distinguished contribution to Masonic music after which WBro Trevor Boswell PGSec read a declaration scroll saying that Bro Peter had been awarded the PGM’s Certificate of Merit. 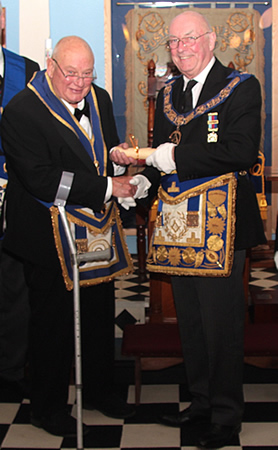 The PGM then announced a further surprise and awarded Bro Davison a field promotion to Past Provincial Grand Registrar – the highest rank that can be awarded to a Brother who has not been installed in the Chair of King Solomon. A surprised and amazed Bro Davison thanked the PGM for the unexpected honour and was escorted back to his seat.

Much to our WM’s surprise the PGM did not return to his seat.  Instead he started to extol the virtues of another Brother – WBro Jim Clement - and, to universal acclaim, also awarded him the Certificate of Merit.  The expression of surprise on the WM’s face had to be seen to be believed.  However that was nothing in comparison to his reaction on being told that he was also being promoted to Past Provincial Senior Grand Warden.  Not often moved to tears or lost for words, the WM was on this occasion. 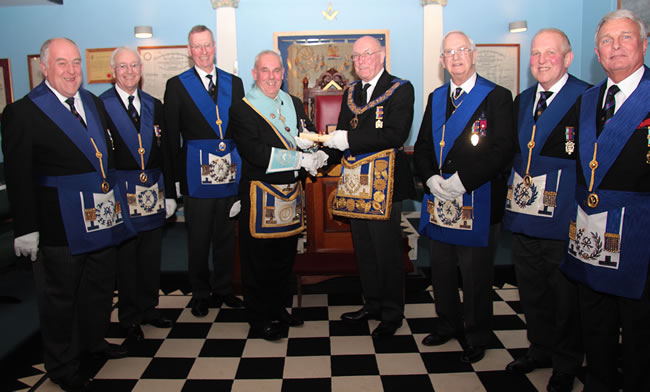 It is a rare honour for one Lodge to be honoured by two of its members being promoted in the field and receiving the PGM’s Certificate of Merit.  It really made for a very special and memorable meeting and a fitting celebration of the Lodge’s 125th Year.