It was a very sad day for Freemasonry in general, and the Wellingborough centre in particular, when on Sunday the 14th of June 2020, WBro Stanley George Wilford PSGD passed to the Grand Lodge Above after a long period of ill health. He was 92-years of age.

WBro Stan was a Freemason for nearly 70-years throughout which time his commitment and contribution to Freemasonry as a whole and to his own lodges especially was both tremendous and unstinting. 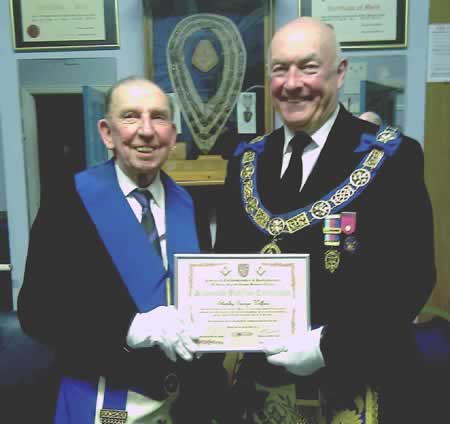 It all began on the 18th of March 1952 when WBro Stan was initiated into John Pyel Lodge No. 5195. After progressing to become Master of the Lodge in September 1963, WBro Stan went on to serve as Director of Ceremonies and Almoner.

WBro Stan was also a Past Master of Old Wellingburian Lodge No. 5570, having been installed in 1978 and again in 2005. Indeed, he also served as the Lodge’s Organist for nearly 15-years.

In addition, WBro Stan was honoured to be installed as Worshipful Master of the Northamptonshire & Huntingdonshire Lodge of Installed Masters No. 3422 in 2008.

At a Provincial level, WBro Stan was appointed to the Active Rank of Provincial Junior Grand Warden in May 1970.

He was subsequently honoured with Grand Rank in 1982 when he was appointed as Past Assistant Grand Director of Ceremonies. His continued contribution was further recognised with promotions to Past Junior Grand Deacon and Past Senior Grand Deacon in 1994 and 2008 respectively. Both appointments reflected his tireless work for the good of Freemasonry, and the esteem in which he was held within the Province and beyond. WBro Stan was heavily involved with Palmer Court, the Masonic Care Home in Wellingborough, from the very beginning.

E Comp Stan was exalted into the Holy Royal Arch (Wellingborough Chapter No. 737) in 1965 subsequently becoming MEZ in 1979.

His equally distinguished career in the Holy Royal Arch saw him appointed to the Supreme Grand Chapter rank of Past Grand Standard Bearer in 1992.

In September 2015, E Comp Stan became the proud recipient of a Royal Arch Jubilee Certificate marking his 50-years of exemplary service to the Holy Royal Arch. Furthermore, in June 2016, he was honoured with the Most Excellent Grand Superintendent’s Certificate of Meritorious Service, which reflected his commitment, dedication, and unfailing encouragement to all Companions.

Outside of Freemasonry, Stan took over the family auctioneering business when he was only 17, after his father died from the aftermath of gassing in World War I. Under Stan's leadership, the company grew to become a Wellingborough "institution". It was eventually sold in 1999, following the untimely death of Stan's son, Tim.

The support that WBro Stan received from his beloved wife, Jessie, was immense. Between them, they helped and supported innumerable people and causes over the years.

Never has the expression, “he lived respected and died regretted”, ever been more apt.

May WBro Stanley George Wilford PSGD rest in peace. We will be forever grateful for his contribution to Freemasonry in the Province.