It is with great sadness that we announce the passing of WBro Dr John Robert (Bob) Beeton PJGD to the Grand Lodge above on Tuesday the 24th of September 2019.

WBro Bob was the Senior Group Officer for Peterborough for many years. He was a very active, well-liked and respected Freemason throughout the Province and beyond. 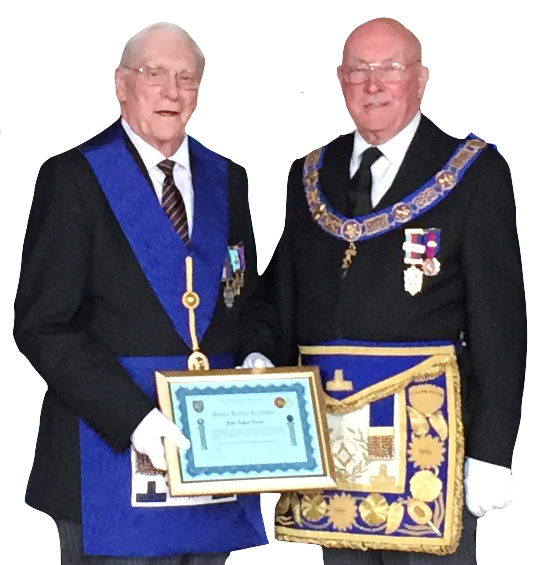 A private family-only funeral will take place on Tuesday the 8th October 2019 with a memorial service to be held at Peterborough Cathedral on a date to be confirmed. Further details will follow when available.

On Thursday the 3rd October 2019, at the Installation meeting of Fitzwilliam Lodge No. 2533, WBro Russell Laxton PPJGW presented the following eulogy.

Bob is survived by his wife, Annette; his two daughters, Sandra and Claire; his son-in-law, James; and his grandson Fin.

Bob's family came from Yaxley near Peterborough where his father ran a successful haulage business.

After leaving junior school, Bob was enrolled as a boarder at Kimbolton School where he stayed until 1957.

Upon leaving, Bob went to Durham University where he studied and qualified as a doctor; he also met Annette there.

After university, Bob moved to Norwich where he lived for several years before returning to Peterborough. He joined a successful GP partnership where he became senior partner, a role he performed until retirement.

During that time, Bob was appointed as the team doctor for Peterborough United Football Club. He enjoyed many Saturday afternoons watching "The Posh" in their heyday.

Bob was a keen sportsman and played cricket for Peterborough Town Cricket Club and Milton & Longthorpe Cricket Club. He was also a past captain of Peterborough Milton Golf Club where he continued to play up until his passing.

Bob was a Lewis. He was initiated into Old Kimboltonians’ Lodge No. 7204 in May 1968, later joining Fitzwilliam Lodge No. 2533 in 1984. Interestingly, neither of these lodges were his father's.

Bob was also a member of the Palmer Lodge of Provincial Grand Stewards No. 8995, Northants & Hunts Lodge of Installed Masters No. 3422, and Three Counties Lodge No. 9278.

E Comp Bob was exalted into the Holy Royal Arch in Chicheley Chapter No. 607 in April 1984 subsequently becoming MEZ in 1991 and joining Chapter of First Principals No. 3422 in 1999.

Bob was promoted to Grand Rank in both Craft and Holy Royal Arch. He was a Group Officer for Peterborough for several years, eventually becoming the Senior Group Officer.

Bob was installed as a Knight in the Norman Wright Preceptory in November 1988. He was honoured with Great Priory Rank in 2008.

He was also a member of Rose Croix in the University Chapter in Cambridge, and the Medeshamstede Chapter in Peterborough, where he gained his 30 degree.

Bob was also a member of Sir Thomas Tresham Tabernacle of Knights Templar Priests, and the Crux Rubra Conclave of the Red Cross of Constantine.

Only last year, after a trade off with WBro Alan Nicholls, Bob succumbed to joining the Norman Rolfe Lodge of Mark Master Masons. Alan was Master of Norman Rolfe Lodge, and Bob, the Most Puissant Sovereign of Crus Rubra Conclave. They each became the other's candidate.

Bob has had a very distinguished career in Freemasonry, which was his life.

He was a dedicated Mason, gentleman and good friend. He was well-liked and respected, and has died regretted.

Bob will be sorely missed by us all. May he rest in peace.