The Holy Royal Arch Masonic Province of Northamptonshire and Huntingdonshire is led by the Most Excellent Grand Superintendent, E Comp Jim Boughton. His authority derives from a Patent issued by the First Grand Principal, HRH the Duke of Kent. The Most Excellent Grand Superintendent appoints his Deputy, Second and Third Provincial Grand Principals.

Below are pen-portraits of our Provincial Executive. Click each picture to view it full-size. 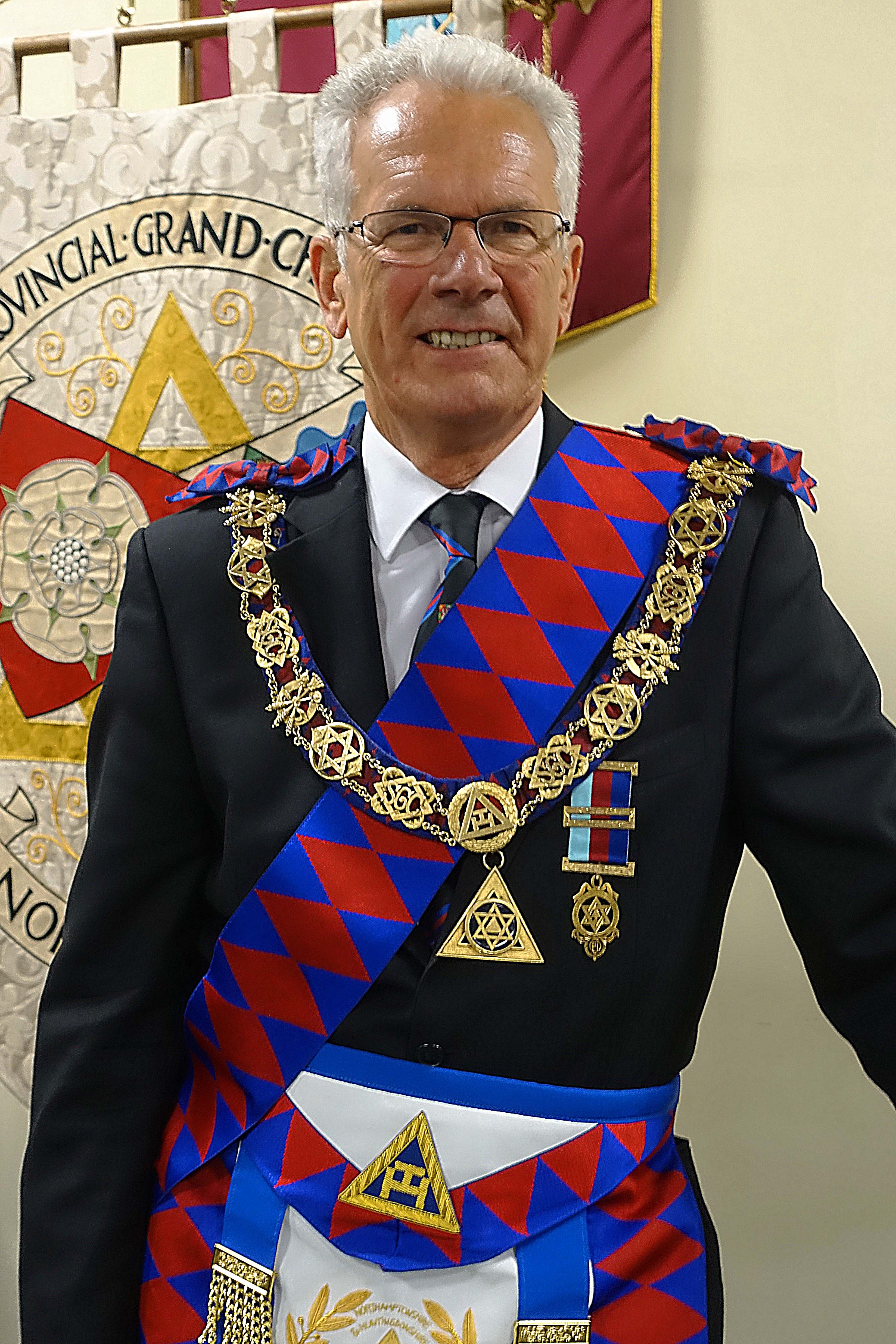 My journey into Freemasonry began in 1985 when I was Initiated into Heigham Lodge No 8486.

Mastership of my Mother Lodge came in 1992 followed by a fascinating journey through Craft Masonry culminating in the appointment in 2012 as Assistant Provincial Grand Master.

During the 37-years to-date I have also enjoyed exploring many other Orders in Freemasonry but surely nothing can be so important as the culmination and completion of Pure Ancient Freemasonry.

This particular journey began in 1987 with Exultation into Pemberton Chapter No. 3039, followed in 1990 by becoming a joining member of the newly formed Whytewell Chapter No. 8400, passing through the Chairs of both Chapters from 1993 to 1997.

In February 2018, I was delighted and honoured to be appointed as Most Excellent Grand Superintendent and look forward to encouraging others to join us in experiencing the joys of the Supreme Degree of the Holy Royal Arch, the culmination of Pure Antient Freemasonry. 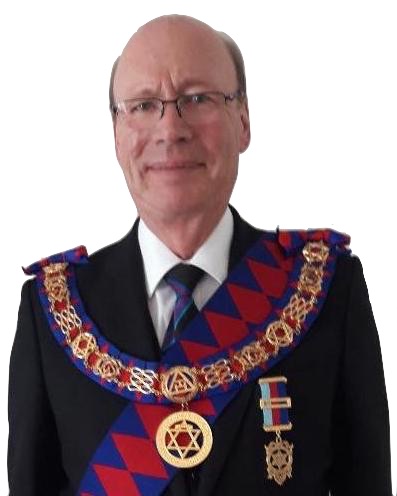 Now a member of Petriburg Lodge No. 8767 in Peterborough, I am due to be invested as SW in September 2019. God willing and subject to the normal formalities, I hope to be Installed as WM in September 2020.

Moving around the country so much was not conducive to putting down roots and joining other Masonic Orders, but I felt the need to complete my journey in Pure Antient Masonry and was Exalted in the Chapter of Perseverance No 213 in Norwich in 1993, becoming First Principal in 1997.

I joined Dr Oliver Chapter in Peterborough in 2002 and was invested as Scribe E in 2003. I was Installed as First Principal in October 2013 and had two wonderful years in that role before taking office as Scribe E again.

My Provincial Grand Chapter appointments include Provincial Grand Treasurer for the Province of Norfolk (1999) and Provincial Grand Registrar in this Province (2014). In this Craft Province, I was honoured to be appointed as Past Grand Superintendent of Works and a Group Officer for Peterborough in 2016.

It was an honour beyond my wildest dreams to become 2nd Provincial Grand Principal in February 2018 and I was further honoured with appointment to Supreme Grand Chapter rank as PGStB in April 2019. I thought that, at that point, I had reached the pinnacle of my Masonic career, so it was an unexpected and wonderful surprise to be asked by our Most Excellent Grand Superintendent to become his Deputy in June 2019. This was followed by promotion to PGSwdB in 2020.

I shall continue to work hard to support our Most Excellent Grand Superintendent, E Comp Jim Boughton and the other members of the Provincial Executive, in our quest to encourage all Master Masons to complete their journey into Pure Antient Masonry so that they may enjoy the Companionship of the Holy Royal Arch.

I was initiated into the Lodge of Perseverance No. 455 in 1989. At that time I was a serving Police Officer and therefore had a limited amount of time for my Freemasonry. I became Worshipful Master of my Lodge in 2002 and again in 2003 after which I became ADC and DC until 2017.

I was appointed to Supreme Grand Chapter Rank in 2017 as PGStB. In 2018 I was invited to become 3rdProvGPrin, of which I was extremely proud. I was promoted to 2ndProvGPrin in 2019.

It has been an honour to serve the Province at all of these levels and a privilege to meet so many wonderful Companions. 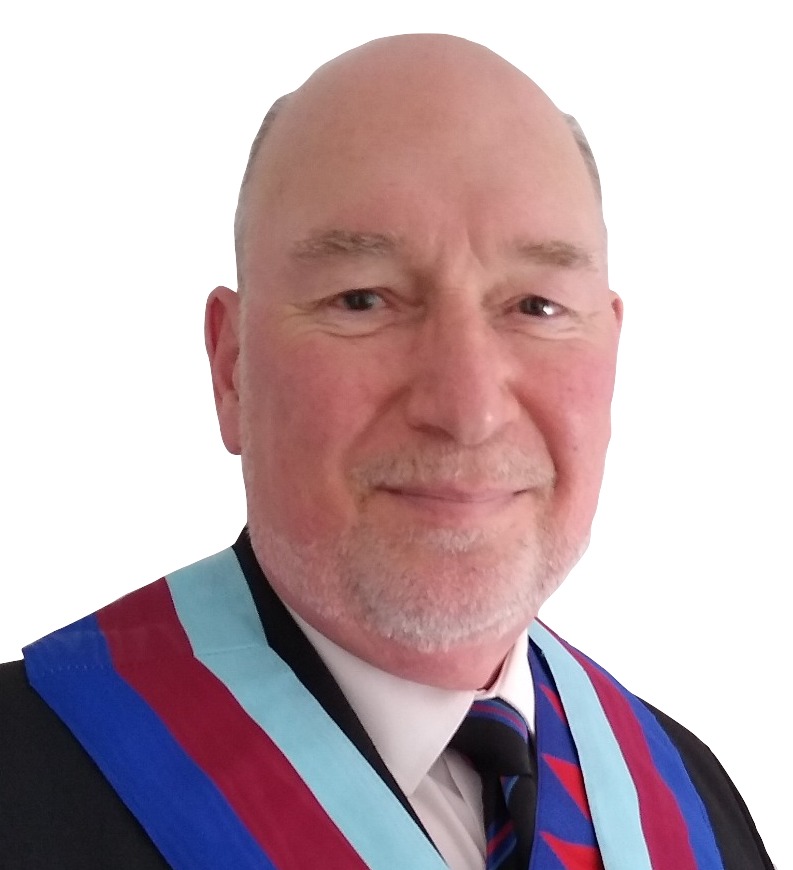 My father was a member of Greenhill Lodge No. 5936 in Hertfordshire, and I was duly Initiated into the Lodge in 1984 - sadly, after my father had passed to the Grand Lodge above.

I progressed through the offices before being becoming Worshipful Master in 1991. Upon installing my successor, I became Secretary, an office I continued to occupy for ten years.

I was appointed to the Provincial ranks of PPGStB in 1998, PPDepGReg in 2005, and PPGReg in 2012 … the same year I resigned from Greenhill Lodge to concentrate on my Masonry in the Province of Northamptonshire and Huntingdonshire – I had moved to St. Neots in 1985.

I became a joining member of Euston Lodge No. 2283 in 1993, eventually going through the offices and becoming Master in 2006. I am currently the Lodge’s Chaplain and Preceptor.

I was honoured with the Provincial rank of ProvJGD in 2012 and was further promoted to PPGReg in 2017.

I completed my journey in Pure Antient Freemasonry in 1993 when I was Exalted into Euston Chapter No. 2283. I progressed through the usual offices before becoming MEZ in 2007.

Our previous MEGS, E Comp Wayne Williams, appointed me to Prov1stAGSoj in 2010, the same year I joined Chapter of Installed First Principles No. 3422.

In 2014, I was invited to become ProvGAlm, an Office I held until 2020. In 2018, I was further honoured by appointment to the Supreme Grand Chapter Rank of PGStB.

In 2020, our MEGS, E Comp Jim Boughton, saw fit to honour me with promotion to Third Provincial Grand Principal, thus giving me the opportunity to serve our wonderful Province even further.

I very much look forward to enjoying this next exciting phase of my Masonic journey. 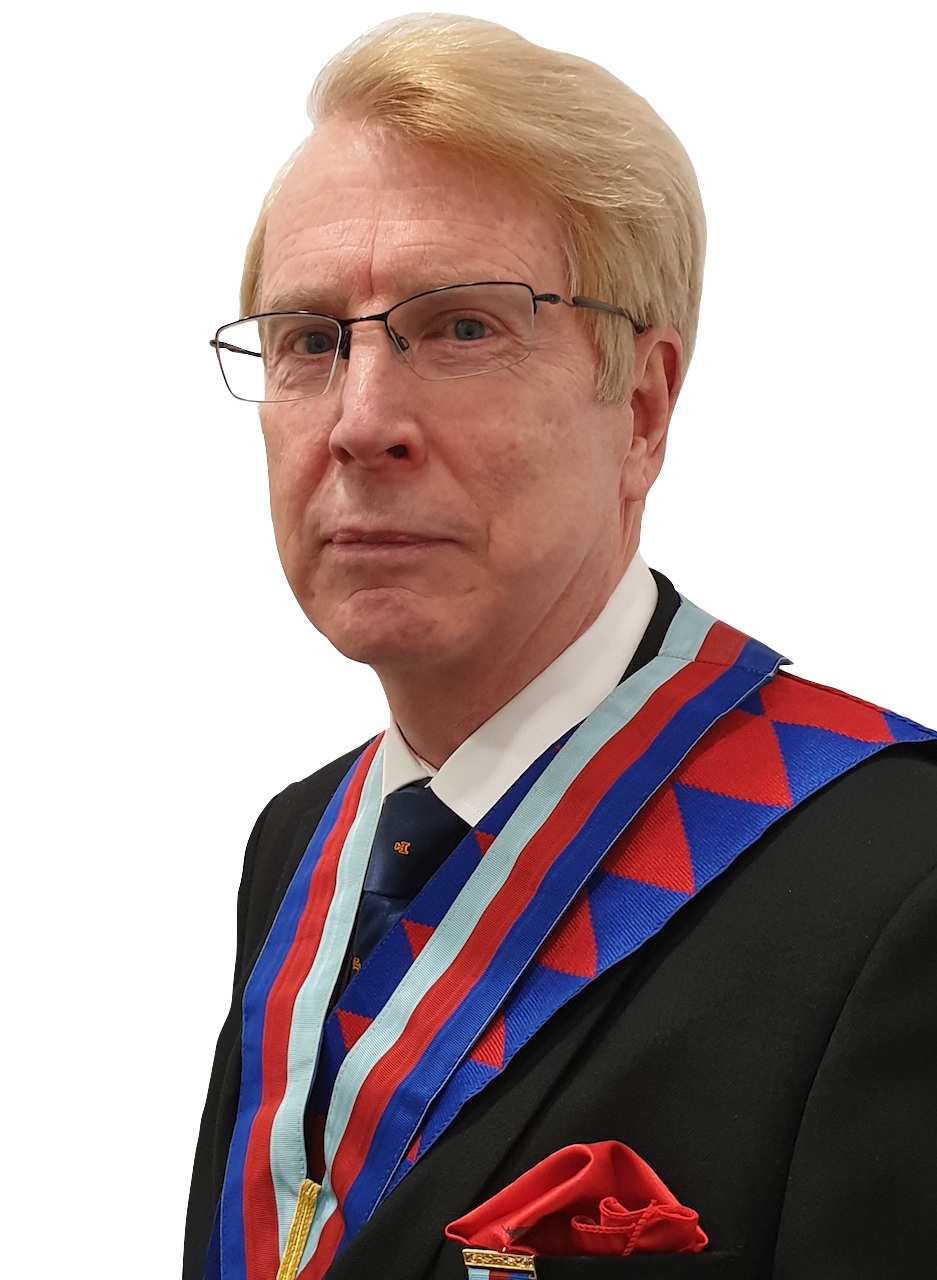 I am reminded of the Beatles’ song “The Long and Winding Road” when I think of my Masonic journey.

I was initiated in to Kynaston Studd Lodge 5416 in 1996. I found myself through my 3 degrees on consecutive meetings and Inner Guard at the next Installation. One of the things that struck me right from the start was the camaraderie and ethos of Masonry. The focus on helping others less fortunate than ourselves and the sense of giving something back in to society. As a Royal Air Force VR officer, this resonated with me.

I have always enjoyed my ritual and having ceremonies to take part in during the progression and a full programme whilst WM as great. I was then appointed Secretary. An office I held for 10 years. It was the first of several secretary/scribes roles I would find myself in. I seem to attract them! I do, however, enjoy being a key part of a unit’s management and assisting in the focus, forward planning and direction we all need if our Masonic units are to be successful.

Appointment to LGR (2007), MetGD (2009) and SLGR (2010). I was invited to become a VO (2010) and I also became responsible for the official visits of one third of all London “chains”, having one third of all MetGL active officers of MetGD and below as escorts.

I was appointed PAGDC in 2013. This was followed by a SVO appointment. I was soon appointed as “Adjutant” to my MetGInsp and his de-facto deputy. He had line responsibility for 93 Lodges! I am now the deputy project lead for the MetGL Unsponsored Candidate programme which is tasked with managing some 1,300 approaches from people who have an interest in Freemasonry.

But what of the Royal Arch?

I took the decision not to join the Royal Arch until I had progressed through the Craft Chair. In hindsight, I wish I had joined earlier – but hey ho. By then I was living in Milton Keynes and working in Northampton, having transitioned through IT and Response Management in to business consultancy. So, of course I contacted the Provincial office and identified St John’s 3972 as the Chapter that fitted my spec. I was Exalted in 2003 Installed as MEZ in 2013. I have always enjoyed my ritual and the Royal Arch allows its “players” to bring that ritual to life – none more so than our current MEGS suggestions as to how can we do just that. I had joined the Royal Air Force Chapter 7335 in 2009 and managed to hold the same offices in each of my Chapters in the same year. That certainly made life easier for me, although one was Domatic and the other Aldersgate. I became Scribe E of both my Chapters on leaving MEZ. I had also joined the First Principals’ Chapters both in Northampton and London. Having been a member of Installed Masters I already understood the value of these “senior” units and always recommend WMs and MEZs to join them.

Christmas 2015 brought a surprise call from MEGS, E Comp Wayne Williams. Would I like to be ProvAGSE? He explained what the job involved and, sure enough, I was invested in 2016. I have visited every Chapter in the Province and represented the Province at many other Provincial meetings. Wherever I have been in the HRA, I am always welcomed and am privileged to meet interesting and friendly Companions. We are blest with so many in our Province. Appointed ProvGSE in 2019, I am endeavouring to build on the successes and legacies of some truly titanic predecessors such as E Comp Ivan Greaves, E Comp Barry Hadley and E Comp David Brown.

I was fortunate to receive my first appointment to Grand Rank in 2020, when I was made PGStB.

The Provincial Office is here to help and support our Chapters. I am reminded of Arthur Wellesley, Duke of wellington when he said “There are two types of Headquarters. Those that serve the men and those that believe the men serve them. The first is invariably more successful than the second”. Happily, our Provincial offices – Craft and Royal Arch – are of the former. Long may it continue. 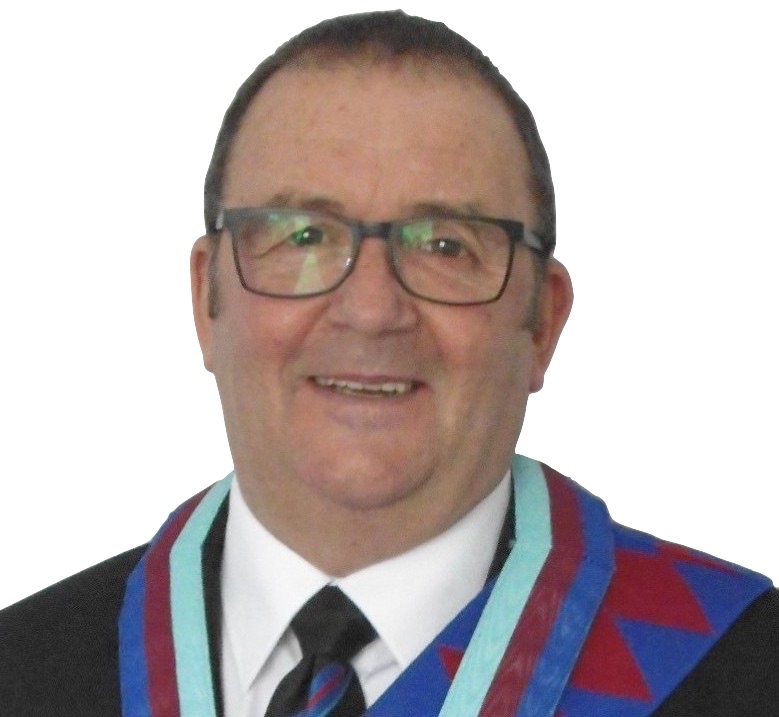 I was initiated in the Ferraria Lodge 8489, Corby, in October 1999 and attained the chair of King Solomon in 2007. This was followed by active Provincial Rank as ProvAGDC in 2012. I was exalted into Thistle & Rose Chapter 6644, also based in Corby, in December 2001 reaching the 1st Principals chair in 2011. Again, I was honoured to receive an active rank in the HRA, again as ProvAGDC. I appointed ProvGDC in February 2018.

Promotion to Prov GDC is without doubt the highlight of my Masonic career thus far. I have visited every Chapter in the Province and am made most welcome everywhere I go. I am proud to be part of the Provincial Executive team and hope my contributions are useful.

I am currently Scribe E of Thistle & Rose Chapter 6644 which also keeps me busy but fits nicely with my ProvGDC duties. Additionally, I am a member of several side degrees including Mercia Chapter 658 Rose Croix where I hold 30 Degree rank.

I am immensely grateful for all the support I receive now or received in the early days when I found learning my HRA ritual sometimes hard going, but must mention the late E Comp Lyndon Price, my proposer into HRA who acted as my own personal mentor during this time and promised me it would all eventually come good - how right he was!

The Royal Arch an enjoyable and colourful degree and I remember someone once saying smiling is not an option it is compulsory.