A unique ceremony took place on 27 April 2012 at the Convocation of the Provincial Chapter of First Principals No 3422 in Northampton. 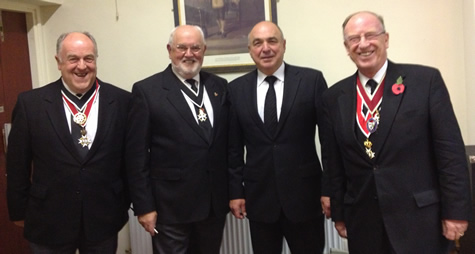 The Most Excellent Grand Superintendent said

This is yet another example of how Heads of Orders in this Province work so closely together for the good of Freemasonry in general. We enjoy each others' company. We support each others' endeavours and it is good that we are seen participating in the ceremonies of the other Degrees. But it was too good an opportunity to miss when on just this one occasion, I was able to appoint and invest my Deputy Grand Superintendent and the 2nd and 3rd Provincial Grand Principals as the three Sojourners.

The Most Excellent Grand Superintendent added in his trademark mischievous style

I may live to regret such a rash move as facing them in open Chapter isn't a pretty sight – more akin to a rogues' gallery. Who was it that said about the three wise monkeys, see no evil, hear no evil and speak no evil? No truer words were ever spoken!